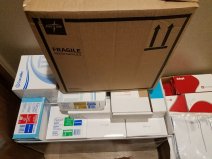 Over the year’s Terry would tell me that I had an illness…. he would say that I had pack rat syndrome.

So, I went ahead and decided to look up the definition of a pack rat.  I found that a pack rat is a bushy-tailed rodent of western North America that has well-developed cheek pouches and that hoards food and miscellaneous objects.

Then I thought about this definition and asked myself, do I have a bushy tail? I don’t think so! Do I live in western North America? I know I live in North America, but I live in the east (in Florida) so does that mean I don’t live in the west…I’m so confused!! So, do I have well-developed cheek pouches? I looked at myself in the mirror with and without food in my mouth and I really couldn’t tell? So, I’ll let you guys decide the answer on this one. Now do I hoard food and miscellaneous objects? Well….I’ll have to admit I do have a slight tendency to do this. I do know my older brother used to notice that I tended to keep a very large supply of meatballs in my freezer and yes, I had a feddish for stuffed animals and sometimes would buy one too many (see photo). But you know most people that are hoarders, tend to have junk all over the place. However, I am very neat and a bit OCD so I must keep things in very neat piles and to make sure all my stuff is out of view so there is no clutter. So, does that make me a neat pack-ratter?

So, I explored the definition of a pack rat further and discovered that it is a person who collects or hoards especially unneeded items. So, I thought to myself…. did I really need all those stuffed animals…well probably not, but they were so cute and cuddly! Luckily, since we were selling our 4,000-sq. ft. home last year and were moving into the small recreation vehicle I had to donate all my stuffed animal friends. No room for them in the Inn. So, Bye bye dear friends!

Okay, so now you see all these boxes of stuff in the other photos. They are all the urostomy supplies I accumulated for Terry. Yes, I will admit I probably went a bit overboard here, but the stuff was needed for changing out Terry’s uroromy bags on a regular basis although I probably had 10 years’ worth of supplies on hand. At least I kept things neat and out of site in our RV because I told you I was an obsessive neat freak.

Well today I finally boxed up all this stuff up and donated it to Moffit Cancer Center for others in need to use. So now the RV feels a bit empty. So, am I now a cured pack ratter?

Okay, I don’t know and I’m a bit confused again?

Let’s just all agree for now that I’m a temporarily-cured partially diagnosed rat packer (since some things I hoarded were necessary although somewhat excessive) and that I will admit I still do still have a feddish for stuffed animals and I will always love my meatballs!