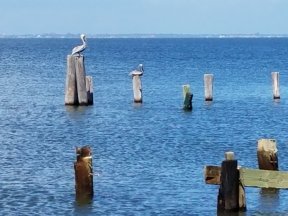 Hey All,  Did a video on the beach on the Atlantic Ocean, right across the street from Patrick Air Force Base.  The video has an interesting ending as I didn’t realize the recording button was still on. There’s probably an easy way to edit the video, but I didn’t want to mess it up or inadvertently delete it.  So, it may make you a bit dizzy at the end, sorry !   In addition, I’ve also included a couple of other photos for you above.  The one of the beach was taken in the same vicinity of where I did this video.  The other two photos were take on the Indian River side of the air base directly opposite the Atlantic Ocean,  Enjoy !! Gary

25 thoughts on “Visit to the Beach on the Atlantic Ocean”