Had a unique opportunity to witness an up and close Magician and Illusionist show on Saturday evening at the MacDill Air Force Base Theater. The show was totallY free in support of veterans and the performer was Mike Super the winner of a popular talent show in England and also the runner up contestant on the finals on America’s Got Talent. He’s also been a regular guest on “Ellen” and several other popular TV shows. He soon will be having his own weekly show on NBC as well.

His show was fantastic. I don’t know how these guys do their illusions. One minute he’s holding a complerely flat piece of paper, and the next minute he cruches it up and starts to flatten it our again and right before our eyes out comes a large bowling ball. He took 3 metals finger rings that he borrowed from folks in the audience and while he placed the 3 rings in one of the girl’s hands that donated one of the rings, he instructed her to close her hand tightly and then he said something magic, and then he had the girl open her hand and all 3 ring were completely fused together. He even verified with the lenders that they were actually their rings. Naturally, he said the magic words again and the rings in her hand were all detached again when she opened her hand. I can go on and on! Unfortunately photo taking was not allowed during the performance.

I was so inspired by this show that immediately after it I had to try a trick of my own. I ‘ve actually done this remarkable trick in the past. I call it “my dissapearing act”. Decided to drive over to the Hard Rock Casino to perform this unbelievable feat. First, my wallet was filled with about $300 dollars in cash as I went in and got ready to perform my show, and then right before my very eyes in less than an hour, I made it all dissappear ! Of well, the story of my life….I am such a loser. I think I actually had more fun last night watching the first magic show, rather than trying to do one of these tricks on my own ! 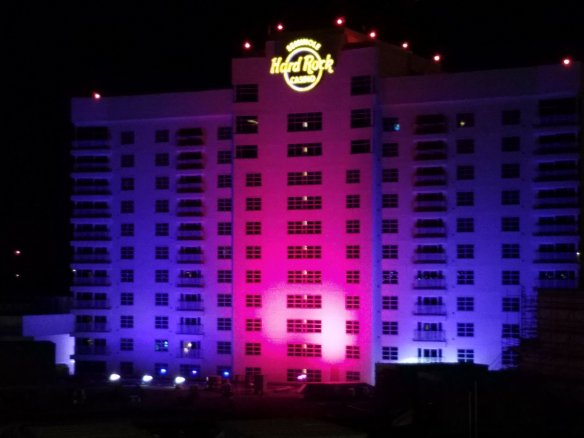 Have a great rest of your weekend!