Do you remember the famous scene in the Wizard of Oz, when a tornado suddenly stuck the town in which Dorothy from the Wizard of Oz lived? In that movie she bumped her head and dreamed that her house was pulled from it’s foundation and went swirling in the air right in the vortex of that tornado?

Well yesterday I think I made a sequel to that movie and became the new Dorothy!

As you know with all my recent health issues, I’ve been keeping a low profile for the last week or so. However, once the pain subsided on the right side of my face, I thought I must at least get out there and get back into my bicycle routine.

Well, yesterday around 2:30 PM, the weather was a bit cloudy and I decided I would get on my bike and do my 25 mile ride along Bayshore Boulevard. I never thought to check the weather.

Then about 12 miles along my route I noticed the waters in the Tampa Bay becoming very rough and the winds started to pick up and then the torrential rains suddenlybdeveloped. Okay….so I decided to do an about face and startvpeddling rapidly back towards my home on MacDill Airforce Base (about 12 miles away).

The winds became increasingly intense and the rain came down so forcefully that it was stinging my skin. I had no place to hide! Suddenly tree branches started falling from trees and people’s trash barrels and other debris briskly began getting sweeped away into the middle of the road and then swirling right in the air. It was like a scene out of a movie! As I was trying to peddle rapidly and praying to make it home, I managed to dodge all the flying debris all around me. Then suddenly the winds became so intense that at one point it lifted me and my bicyle right off the ground….I was actually peddling in thin air! I thought my end was truly near. I haven’t piloted a flying aircraft since my days as a helicopter pilot back in the Army in the early 90’s so if felt like old times again piloting my aircraft! I managed somehow thru the grace of God to keep my bike steady even when off the ground and I didn’t fall off it! Once I got out of the minny vortex of winds the wheels of my bike hit the ground again and I continued to proceed rapidly on my 12 mile trip back towards the airbase!

It was not until I reached the south guard gate at MacDill AFV did I find out that Tampa was in the middle of a Cat 1 tornado! OMG!!!

At the time that I arrived at the gate, thankfully the winds started to die down a bit, but it was stll raining pretty hard. So I waited for about 1/2 hour at the gate until the “all clear” alert from the airbase came thru indicating that the tornado had passed. I then continued to proceed along my course (still in the rain) for about another 3 miles until I reached my home.

Luckily, there was no major damage to my RV, however my 3 nice plants had blown over and were way down the street and all my outdoor furnishing had toppled over and were also transplanted to other locations. In addition, my beautiful sewage system and piping that I so proudly built when I arrived here a month ago had fallen down.

As of this writing…I have managed to clean everything up and to get all my stuff outside back into it’s rightful place.

I was so lucky to make it thru this storm with only very minor injuries from the falling debris…although I must admit, my heart rate jumped up a bit as well as my anxiety level. 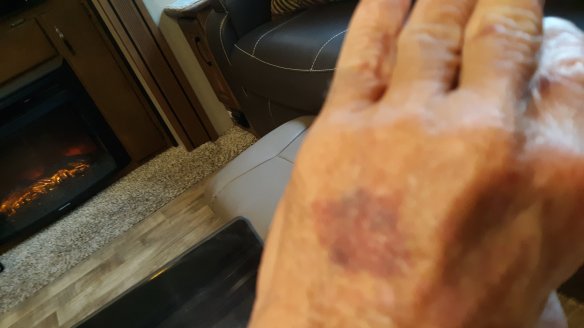 Yes, you can call this ordeal Wizard of Oz (The Sequel). However contrary to Dorothy’s adventure this was not a dream and I never encountered on this trip the wicked witch of the west….

Or her sister….the good witch of the east….

As I had already visited those two witches recently.

The morale of the story is….check the weather forecast first before going out on long bicycling adventures and always follow the yellow brick road!

9 thoughts on “Just Call Me Dorothy! You Have Got To Read This!!”