Recall my former post, “Slurrpies Past, Present and Future” that I posted back in August where I stated that on the way home from each 25 mile bike ride I would get myself a Slurrpy at the shoppette on base as an after bike ride treat. It was a great deal…they were on sale all summer long for only 69 cents! I saved all those cups and when I counted the ones over a selected time period, I would know how many 25 mile bike rides I did and how many miles I peddled over that timeframe.

I originally was going to write a follow-on post called “Sometimes Things Never Change” as of course shortly after I got back to Tampa, I started doing my 25 mile bike rides again. Once again I stopped by the shopette on the way home from my bike ride for my Slurrpy (except that now they cost 99 cents, but still pretty cheap and delicious). Below is my display for all bike rides that I did during the month of October. There have been 21 cups collected x 25 miles per cup which equates to 525 moles peddled in October over the 31 day time period which results to an average of 16.93 miles peddled on average per day. I know…as you can see, I am a detailed numbers guy and like my stats! 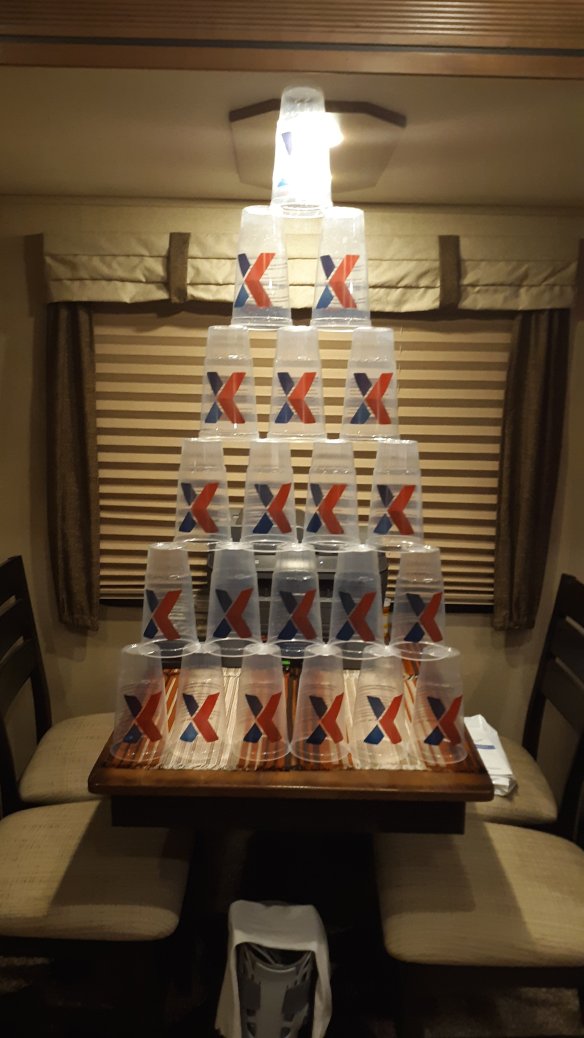 Well, as you know things have actually changed a bit as of Saturday afternoon. I no longer will be able to bike ride for awhile due to my recent injuries. So far in November I was 3 cups for 3 days in November which equates to 75 miles peddled in 3 days. If I extrapolate the average number of miles I will peddle per day in November, regretably it will only be 75 miles divided by 30 days which equals only to 2.5 miles on average per day. That sucks! My stats will be messed up !!

I suppose the next time I get to ride my bike again after I recover from all my medical issues it will probably be in mid December. By that time it will be cold enough that I will be purchasing peppermint cuppachinos or hot chocolates after my after bike rides instead of slurrpies !

As you will notice from the slurrpy cup display that I made for today’s blog, it looks like a Christmas tree. Maybe I’ll get some red and green or gold and silver sparkly spray paint and after coloring the cups I’ll glue them together and designate my creative masterpiece to be my inspirational Christmas tree and it will remind me that a point sometime just before Christmas I’ll hopefully be able to bike ride once again !!!