Attached is a photo of the Tampa Veterans Administration Hospital which has been my home away from home especially over these past few weeks.

As promised, I’m going to give you an update on my health conditions following all the medical appointments that I had on Wednesday, November 7th.

First appointment I had was with the Chief Nurse from the Urology Surgical Ward. The purpose of that visit was to get my pre-surgicsl paperwork so that I could get my blood work, EKG and chest x-ray completed as a requirement for my upcomming surgery scheduled for Monday, November 9th. The nurse was not that friendly.

When I walked in she saw the walking cast on my leg and other cast on my hand and pre-maturly said they would not be able to operate on me in this condition. She indicated that it would be hard for me to shower and to clean my incisions and to apply new dressings as required after my surgery. There also seemed to be some discrepancy in the meducal notes that did not indicate that I would be remaing overnight after my surgery. I told her that I didn’t have a designated driver and that the surgeon had told me at our last meeting that due to the complications of my surgery he was planning on having me admitted as an inpatient after the surgery. The nurse said she would clarify this with the surgeon (who us only there on Tuesdays and Thursdays) but that if I didn’t have a driver and if no room was available for that day the operation would have to be rescheduled. She then took her stethascope and listened to my heart and indicated that I had a heart murmur (a leak in one of my heart valves) and that the anesthisiologist might have problems with this. She said I should get an echocardiogram to see how serious the heart issue was. I was a bit upset with her lack of compassion, but I told her my waking cast was removable and that at this point the orthopedic surgeon said I should wear it when out and about or when transversing on unlevel surfaces, but when around the house, I could keep it off. The urology surgeon already knew this.

As for my hand, wrist and fingers, I told her these issues were being re-evaluated during my orthopedic appointment that mid morning, but to my knowledge no surgery on my hand would be required. I told her I would get back with her later that day after my other appointments. She then gave me my pre-op paperwork.

I then proceded to get my blood work, chest x-ray and EKG completed which was accomplished very efficiently and without any issues.

My ortho appointment was at 8:30 AM. The doctor was very nice and discussed with me my current foot and hand x-rays. He said that concerning my foot, that fracture was in a difficult place and it is very difficult for the bones to fuse together in a shirt time period. I injured that foot at my brother’s back on 9/11. Th doctir said it would take approximately one year for the bones to fuse together properly and that it is important for me to be very careful when walking on uneven surfaces, so that I don’t end up re-injuring my foot as it could eventually need surgery if I injure ut again. He said that he would have me continue to wear my boot (when out and about on longer walks or on uneven surfaces) and to use my judgment at other times. He would take another x-ray in about one month to evaluate progress. He was glad to hear that my foot was not hurting me when the cast was off while walking in my RV. He also said that riding my bike was okay and did not affect the healing of my foot. Concerning my hand and wrist. He said that the fractures I incured there were fortunately the easiet to heal. The orthopedic surgeon to my delight removed my splint that was orinally put on when I went to the emergency room and gave me a removable cast to wear which would allow me more flexibilty for showering and also give me greater ability to move my fingers which helps for me to do basic things easier. He said the stiches in my fingers would be removed next Wednesday (November 14th) at my next appointment and at that time he would take an x-ray of my hand, wrist and finger fractures again and give me a better game plan concerning the healing of these areas. He also said, from his perspective, he did not foresee any problems for me to undergo my urology operation next week. 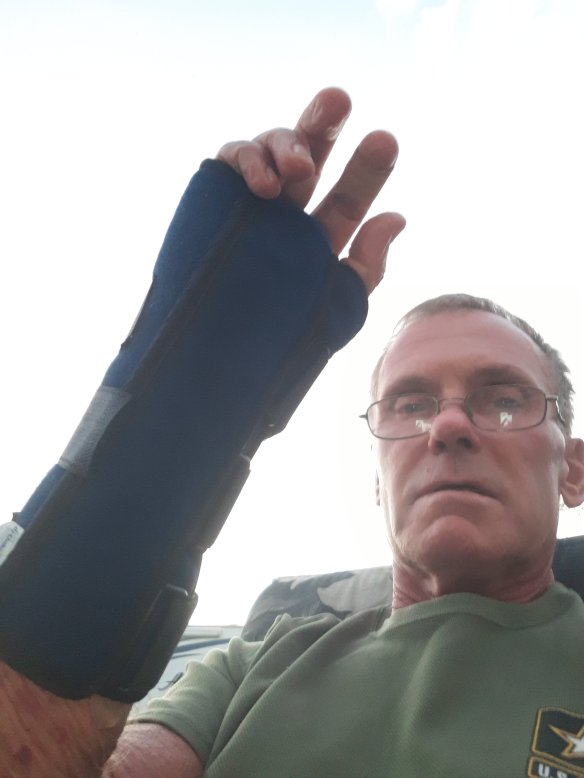 I then returned back to the urology nurse and gave her an update on my fractures and remphasized that the ortho surgeon was not anticipating any surgical procedures on either of those area in the foreseable future. She seemed satisfied and told me that I would be getting a call on Thursday of this week as to what time to arrive on next Monday for my surgery.

My primary care appointment which was supposed to be at 10 Am was cancelled due to a family emergecy of my doctor. I re-scheduled it for November 14th right after my next Ortho appointment. My intent is for my physician to listen to my heart and if she detects heart murmurs, then I will have her schedule an electrocardiogram as a preventative measure. I personally do not think I have a heart problem as I have no chest pain or difficulty with breathing during or after exercising. However you can never be sure of underlying problems. My Dad’s side of family has a history of heart issues and many of my first cousins on that side died in their early 50’s. So why not check for sure.

My Dermatology appointment was supposed to be at 2 PM, but they were able to see me earlier since I was running ahead of schedule. Since I had the removable right hand cast they were able to remove the squamos cancerous growth discovered on that hand from the pathology report. As for my face issues, I’m doing much better. The dermatologist thankfully did not think any of the spots looked cancerous and I probably had a bout of cellulitus when I had issues a few weeks ago. He gave me a burn ointmemt to apply to those lesions and felt they would clear up in the next week or two, but to follow up again if things do not improve.

About all for now concerning my health update. I continue to remain optomistic and feel I’ll be good as new in due time. I just must be patient and realize my injuries could have been alot worse.

8 thoughts on “Update on My Health Conditions”