Last Friday I went with a couple of friends of mine (Paul and Burr) to the Lowry Park Zoo in Tampa to enjoy all the animals there and to do a bit of volunteer work.

We did a lot of walking around the park enjoying all of God’s creations and we also spent some time doing some volunteer work there as well by giving some of animals a good thorough brushing which I know they appreciated on such a hot and humid day.

Later that evening we met up with a couple of other friends for dinner. Will discuss that part of the day a bit later as you might find it a bit interesting! 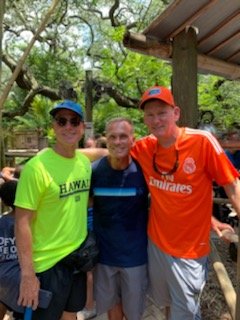 Okay…so after brushing down all the animals, we were supposed to go to another area to wash down the Elephants. However, when we got to that area, to our surprise the little elephant decided to take a bath on his own and to treat his mom to one too! I could sense the mother saying to her child (the baby elephant) “thank you dear for giving me a nice shower, but don’t forget to wash behind those big ears sweetie”.

So later after doing our volunteering work, we decided to take a ride on the log amusement to get a quick splash of water on us to cool down a bit (as inspired by the little elephant in the above video).

Ok, after a hard day of work at the Zoo, of course mixed in with some fun, we had planned to meet a few other friends at a nearby Columbian Restaurant. However plans changed a bit. Our good friend Sam and his husband Jerry suggested that we all meet at the Hard Rock Casino and that he would treat us all to a nice dinner there.

Sam has a very interesting background. He looks so ordinary and down to earth, but he is actually the highest stakes roller (gambler) at the Hard Rock Casino! He has been gambling professionally for 18 years and has a very keen and photogenic mind and can remarkably remember all cards played. He is one, if not the very best video poker gambler in the entire United States. He wins so many national competitions. He gambles and this is “not” a typo!…. in excess of $ 765 thousand dollars a month and wins (on average) about $ 150 thousand dollars in just one night! To think, I usually play penny slot machines and get excited even if I win $ 25 and begin to get a bit nervous and then depressed if I’m down $300 for the night. I can’t imagine gambling that kind of money that Sam plays like it is nothing.

When we arrived to the casino, Sam first gave us a quick behind the scenes private tour of the highest of high-stakes rooms there at the casino that is normally not seen by the public and that needs special authorization and a full security check to enter. When you go into that special room all the seats there are so plush and each high stakes gambler has his/her own private masseur to give back and shoulder massages to as one gambles. There are also special tables right by each gambler with a wide variety of exotic food and drinks. What a comfortable way to gamble the night away! Sam even has a special seat with his name embroider in it! So classy! I would have loved to have taken some pics but I think it would not have been cool to do so in there.

Sam also has his own personal host that takes good care of him and always meets him when he arrives to the Casino. He is there to assist Sam in whatever he needs all night long. Must be nice!

So after our tour, we were them escorted by Sam’s host into a special high stakes restaurant which is not open to the general public. I was simply amazed when I entered. There were all kinds of wonderful appetizers displayed and totally available to us to help ourselves to and of course, all the drinks were gratuitous as well…thanks to Sam! You wouldn’t believe the size of the shrimp…they were the largest I ever saw! Even tried some caviar. Each of us had a private waiter assigned to us our and you could have any and all of the delicious meals displayed on the menu (again..all gratuitous!) I could tell by the attention we were getting, that Sam is definitely a top notch client there and gets top priority service there. It’s as if Sam was a famous king or the President of the United States. It was simply amazing! What a great experience! Sam is really a good down to earth friend who’s so generous.

Sam always has so many complimentary tickets that are given to him by the Casino for attending all kinds of professional sporting events, concerts and other fun stuff and he really loves to share these with us as he really can’t use them all.

Sam is a genuine and giving person and it is so nice to have him as a friend, not because of his stature, but primarily because he is just a very nice guy and fun to hang around with.

I also later found out that the Seminole Hard Rock casino actually takes in the highest revenue of all the casinos in the country and even tops the ones in Vegas! Reason it is so profitable is because of it’s large size, it’s strategic location in a populated city and it virtually has no competition in the area from other casinos. The place is always packed all seven days of the week at all hours of the day and night! Trust me I have seen it crowded throughout the entire night !

It seems that during my short stay thus far since being back in Tampa, I’ve been making some really nice and interesting new friends and have managed to branch out into so many diverse social groups both American and International as well.

I’m just trying to take it all in!

Have a great rest of your week.